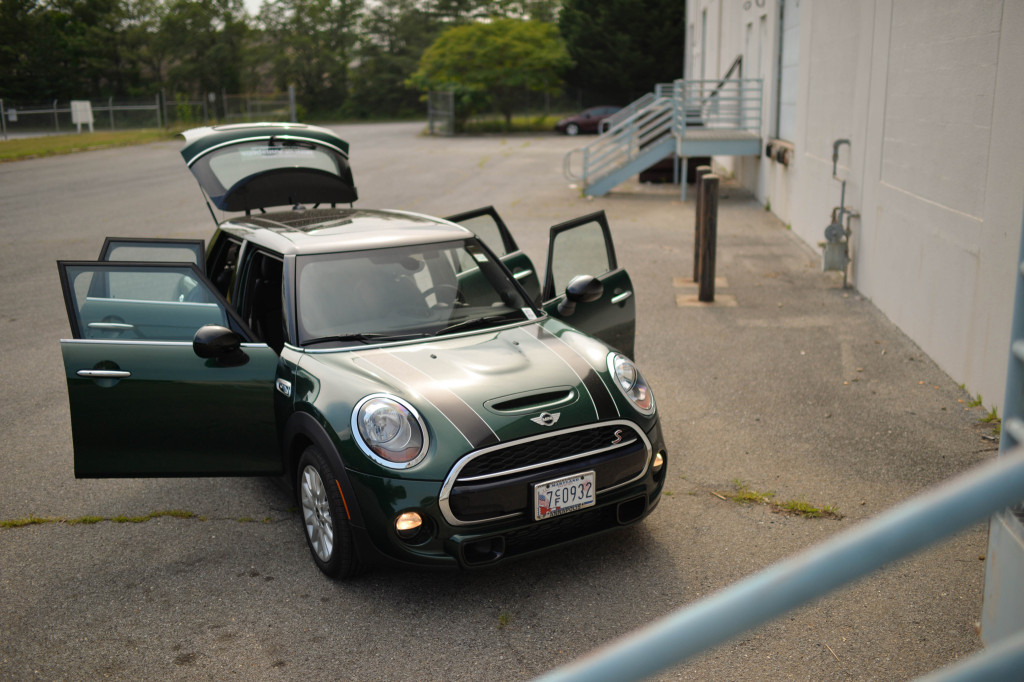 The latest evolution is the F55 chassis Mini Cooper Hard top 4 door.  This entire review could be summarized by saying that the new Mini is a front wheel drive BMW.  If you closed your eyes and drove it (not reccomended) you couldn’t tell it apart from a 2 series.  All of the interior materials are straight from BMW, put together with Mini style.  The engine is straight from BMW, the engineering, and everything else, is all BMW.

What’s the deal with the 4 door Hard top?  The Mini cooper has had a few variations over it’s lifetime  The hard top is the Standard “traditional” Mini cooper, and now they’ve viven it 4 doors.  The first true 4 door Mini was the mini Countryman, although it was a great car, it was not well received by Mini enthusiasts and was a bit of a departure from the Mini formula.  Now you can have 4 doors for the Family, and still enjoy your Cooper go-kart, right? Well, not exactly, there are a few things to point out before you decide weather this car really has the best of both worlds. Let’s start out with the pros and cons of this new 4 door mini.  Pros:  The fact that it has 4 doors, slightly larger cargo space, easier access to things placed in the rear, slightly easier entry for passengers small enough to the rear, qualifies for Uber.  Cons, 4 tiny doors instead of 2 large ones, reduced visibility for driver,  cramped ingress and egress for driver.  The cons list is short, however, they hold significantly more weight because they impact the driver who will be in the car 100% of the time the car is in use, passengers are optional.  Reading the pros list alludes to some of the issues you would experience in this 4 door car.  Generally, a person shopping for something with 4 doors is looking for the additional space, not just for the sake of having additional doors, you can put a check in the box for having 4 doors on this car, but that would be like passing with a D.  Having 4 doors means smaller doors, and on this little body, these are the smallest doors I’ve ever seen.  As an average sized adult male, with the drivers seat configured to a comfortable driving position, getting in and out was a cramped process, not to mention that there would be no room for a person with legs to sit behind me.   As side from the 4 door issues, the interior is beautifly crafted, but slightly cramped.  The original new style Mini was a smaller car, but still felt larger inside, the newer car starts to close in on you just a bit.   Enough complaining.  I hate to gripe about such an amazing little car, but I’m happy to say that there’s no other bad news. 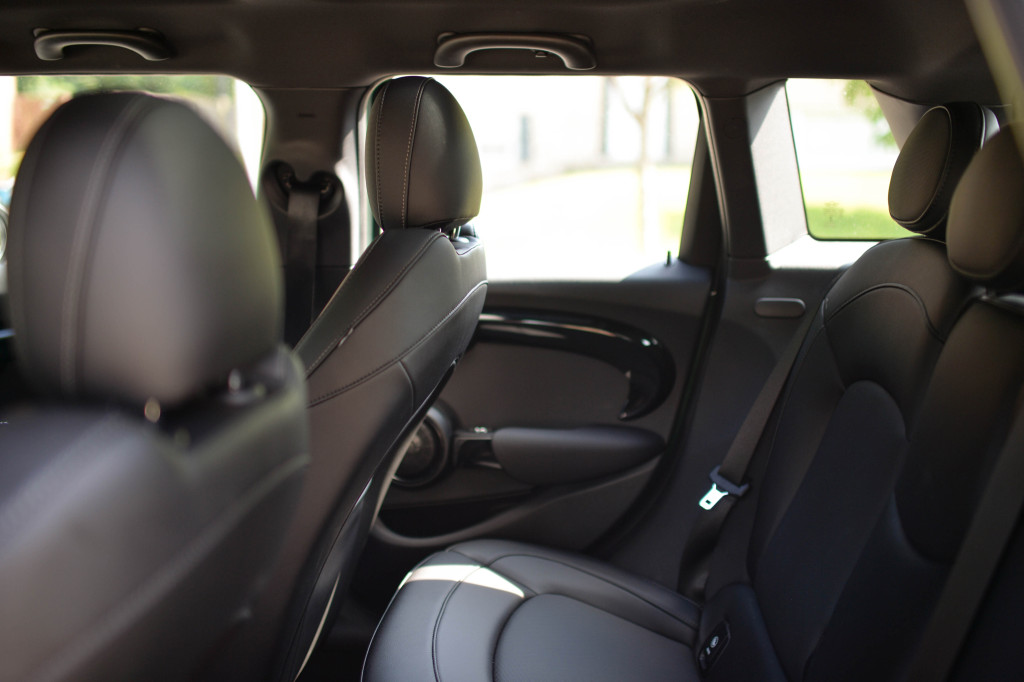 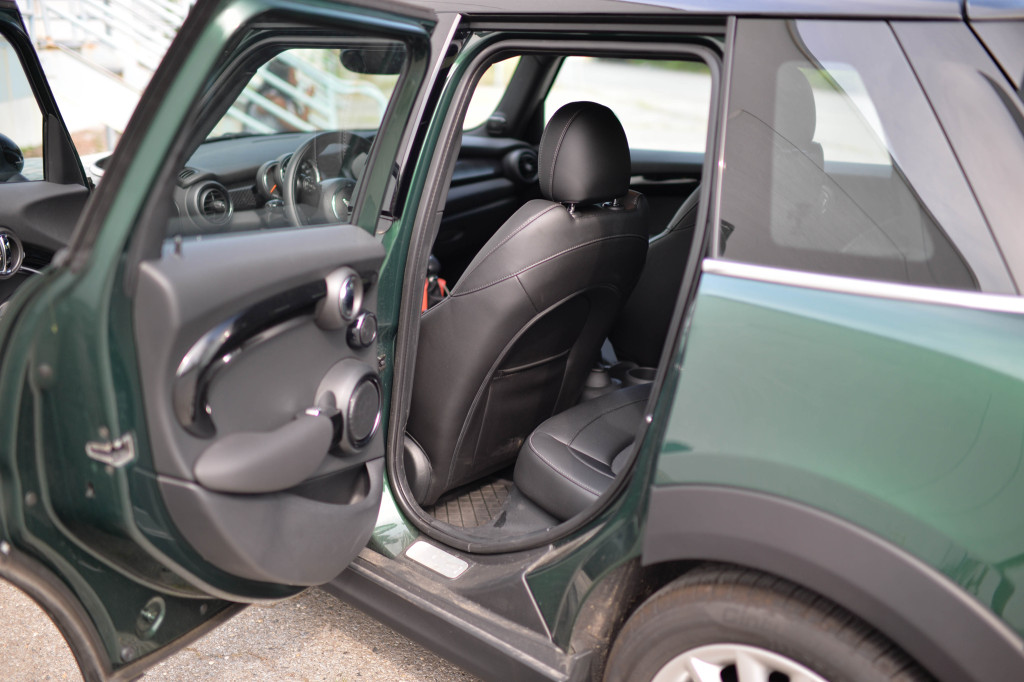 The Mini was always designed with fun ans sportiness in mind, this latest evolution raised the bar even higher and created the ultimate spirited driving mobile.  We tested both the S and Non S versions, both cars were equipped with an automatic transmission.  As a die hard manual transmission fan, i would have rather been slamming gears myself, but i never felt like the auto dumbed down the driving experience, I didn’t miss the stick in this car.    In past years the standard cooper was always a fun car, but left a lot to be desired in the engine compartment.  The new F chassis Mini standard and “S” are Fast and Faster.  The standard 3 cylinder turbo provides plenty of get up and go, accelerates on demand.  It’s actually a varient of the same motor used in the exotic BMW i8 sports car.  The new standard mini’s performance is on par with the previous year’s S model.  The Cooper S has a monster in the engine bay.  The 4 cylinder turbo is an angry little motor that will probably leave you with a few hefty speeding tickets.  The Cooper S model will also do very well in the afermarket tuning world.   The handling is tight and responsive, the transmission downshifts quickly for sudden acceleration, and the highway ride is smooth, not bumpy like you would expect from such a sport oriented vehicle.  With the sport oriented tuning, you get the feeling that you can attack exit ramps at full speed ahead without tapping the brakes.  Everyone knows what “sport mode” does in a car, in addition to standard mode (mid mode) there’s also an economy mode witch allows you to drive the car in a more gasoline friendly manner.  The new Mini’s also include the start stop feature to conserve fuel in heavy traffic.  The Cooper S is absolutely the most fun car you can get with under 200 hp, and you can even still drive it to work every day and get close to 40mpg.

In conclusion, If you’re a die hard Mini but you have a family of 4 normal sized people to transport,  take a look at the Countryman, the current model isn’t quite as sporty, but it still does the job and it’s a pleasure to drive, there’s also an all new model coming for 2017, with it’s BMW soul, it may actually bring back the same feel you get from the hardtop 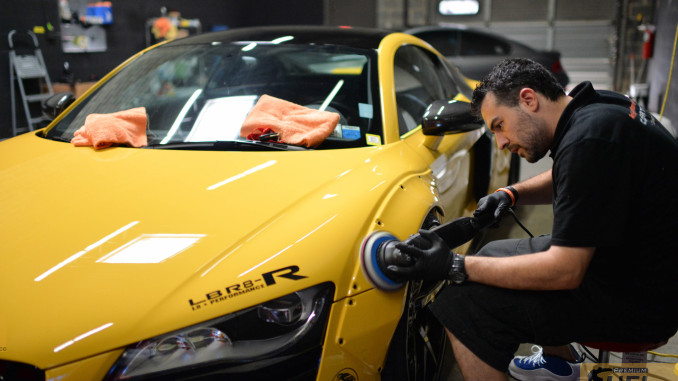 A Buff and Beyond is not your average car detailer. We came across this shop while looking for some added protection for the freshly painted 650i show car. The 650i was re painted after a […]