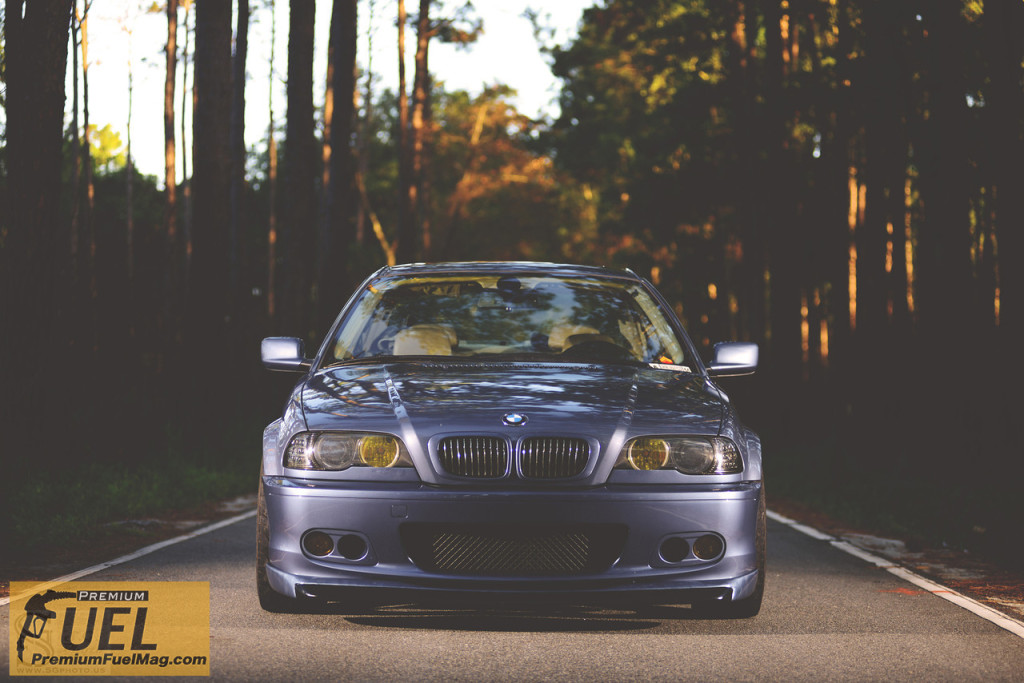 I bought the car back in 2008 after blowing up my beloved 94 Camaro at the street races.  I had a new job, i was making some decent money, and rather than building the Camaro back into an outrageous street machine, I decided that I would lay childish things aside and buy a “grown up” car, just for daily driving, not for modding.  BMW’s were always my favorite brand and I knew that I absolutely had to have a manual transmission. I always hated that my Camaro was automatic.  I took my time and found just what I was looking for in the form of a 2001 Steel Blue 330ci with “M” sport package.

I had the car for about a week before I had put a CSL spoiler on it and started taking it apart to install halo’s in the headlights, and overhaul the entire sound system.  I got into the BMW forums online and a few months later I had it in the shop getting exhaust.  About a year went by, I was happy with it, then a lady in a Mercedes truck ran over the front of my car in a roundabout.  While it was in the shop, I decided to buy new tires, i didn’t like the Dunlops it came with, Somehow it just seemed like a better deal to but new wheels with tires already on them right?  Once i put them on, the car just didn’t look quite right sitting up so high, so of course I needed a whole new suspension, so i installed a fully adjustable k-sport racing suspension and slammed it 3 and a half inches.

One night, coming back home from Baltimore I slammed into a shredded truck tire in the highway, there was just no avoiding it.  It destroyed the front body work, so i replaced it with the front end from a newer model 3 series.  This was also prime time for me to get a Hamann front lip that i always loved the look of, so i ordered that too, and while I was at it I rebuilt the headlights and installed Bosch projectors and HID’s.  While browsing the internet i saw that performance headers for my car were about $100 shipped to my door, the reviews were all favorable, and the install looked simple enough, so i ordered a set of those.  To make a very long story short, the install was HELL but i got it done with the help of good friends.  Shortly afterwards I let my buddy take the car out, he roasted my clutch pretty good.  Never let other people drive your car.  I replaced the burnt clutch and dual mass flywheel with a stage 3 six puck racing clutch, chromoly flywheel, and short shifter.  A few months later I was rear ended, so I took that as an opportunity to update the rear bumper to match my new style front, and to go along with the new look of the rear, i had a custom quad tipped dual exhaust fabricated to finish it off.  WHAT HAVE I DONE! This car wasn’t for modding!  I guess i couldn’t help it, Premium fuel still runs through my blood.  There are a hand full of other minor mods that i have done over time.  If i can hold on to this car long enough, i’d really like to see it with a Chevy powered v8 under the hood, we’ll see.  I will need to get a “grown up” car for daily driving first.

Favorite mod?
It would have to be the suspension and the exhaust. My car isn’t exactly a powerhouse, but with extra crisp handling and the sound of fire coming out the back make driving a lot of fun

Where do you get your work done?
I’ve actually done almost everything myself

Any plans for future modding?
I’ve thought about going wide body but i probably won’t.  The car is just how i want it.  If i get bored enough one day, and have the extra cash, i’ll do a quad projector headlight setup.  Other than that, one day i’d like to see a v8 in there.

What’s it like riding in a drift car?  Well, there’s a lot you can’t see from the video clip.  First, there’s the noise, Drift cars are gutted, so you hear everything amplified in the hallowed […]